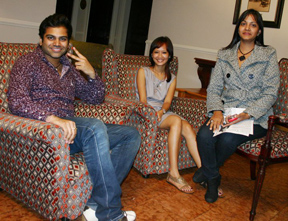 YR: As a branch of the Idols franchise, how do you think Indian Idol has set you up for an international market?
Sreeram: It has made alot of difference, especially since I'm from Hyderabad, and the south is not that well known for commercial shows in the north or outside India. So, it has given me the scope of having an average of 8 to 10 shows, at least, a month which is not an usual scenario if I was not on Indian Idol. People don't know you as much so I would not have been exposed to such a huge market, had it not been for Indian Idols.
Sourabhee: Every contestant reached a stage where they can expose their talent to every corner of the world, not just India. So it really gave us a good chance.
YR: In terms of a judging panel, which judge's critique do you feel was most useful?
Sreeram: I can't name one judge in particular because everyone played their part, from the first round auditions right till the moment I lifted the trophy. Anu'ji did it the hard way and just gives it to you on your face, whereas
Sunidhi'ji who herself is a fabulous singer, gave us some tips and  motivated me while Salim'ji is just such a sweetheart. He is a soft person and never wanted to say something to hurt the contestants, so he criticized in a positive way.
Sourabhee: For me, that would definitely be Anu Malik as he was the most strict judge. Whatever he speaks is all true, because when he doesn't like a contestant's performance he directly says so, and when he likes a performance, he overwhelms us with his praises. That really helped me and my performance as well.
YR: Do you feel that your backgrounds in Tripura (Sourabhee) and Hyderabad (Sreeram) have played an impact on your musical careers? 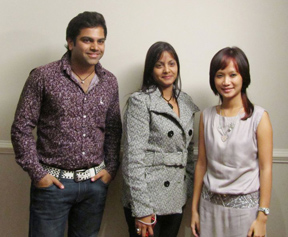 Sreeram: With me coming from Hyderabad in the south, people tend to say that we can't speak great Hindi as we have a typical accent. In my case that was so different, because I am a very good speaker of Hindi, as from the time I was a child, I listened to a lot of Hindi songs and I liked the Hindi language. So that helped me a lot when I came into Idols, and surprised so many people in India that this guy is from the south yet speaks such good Hindi and sings well, too.
Sourabhee: We hardly get this opportunity. Firstly, in Mumbai or Bollywood, people tend to think that North Eastern people don't speak proper Hindi, so they won't be able to sing in Hindi. That was really tough for me in that way.  Indian Idols helped me in the sense that from initially when I started, I was able to see my mistakes and polish them to get better and better.
YR: Do you have any embarrassing performance stories that you'd like to share with your fans?
Sreeram: Yes, I was very bad at remembering my lyrics. That was a tough part for me so I had to especially take efforts not to forget my lyrics while I was performing as it was a "one take" show and there were no re-takes. It was a true show, so I am glad I worked hard at it and went all the way.
Sourabhee: Same story with me. Initially, I couldn't perform without my diary, and that really looked bad when you are on stage and continuously looking at your diary instead of interacting with the audience. So I had to memorise my lyrics so many times. It was in the third round of Indian Idols for the song "Hawa Hawaai" where I forgot my words, but fortunately the judges didn't pick up on it, so I was okay.
YR: What is your fondest childhood memory?
Sreeram: When I had long hair and my mum plaited it to make me look like a girl.
Sourabhee: When I went for my first audition, on the way I was so nervous so my mum told me that if I did well, she would buy me a new dress and if I didn't, she would push me over this bridge that we were travelling on. So luckily, I got my new dress.
Favourites
Venue to perform at:
Sreeram: London and Singapore
Sourabhee: London
American/Indian Idol judge:
Sreeram: Jennifer Lopez
Sourabhee: Khailash Kher
Indian Idol performance:
Sreeram: Koja meri Koja
Sourabhee: I love my India
Musician:
Sreeram: I have so many, Lata Mangeshakar and Kishore Kumar earlier and now AR Rahman
Sourabhee: AR Rahman
IPL team:
Sreeram: Mumbai Indians and Deccan Chargers
Sourabhee: Kolkata Knight Riders
Bollywood actor
Sreeram: Katrina Kaif and Sonali Bendre
Sourabhee: Aamir Khan and Aishwarya Rai

Popular posts from this blog

At home with Jailoshini Naidoo

By Yashika Ramautar YR: Describe your typical morning from the time you get up. JN: I’m not really a morning person, but my TV shoots often start quite early, so my mornings are invariably rushed, with me literally flying around the house trying to get ready on time.  Brush my teeth, shower, hair, make-up, dress up, (I often change clothes a couple of times before I’m completely satisfied). Breakfast is a bowl of cereal with some yoghurt, a cup of green or rooibos tea and a banana. And then I'm off! YR: How long does it take you to get dressed, from after your shower to looking all glam? JN: About an hour and a half...although I've learnt to do it in about an hour if I have to. YR: What are some of your favourite Indian dishes that you can prepare yourself? Can you make Woorunde or any sweetmeats? JN: I’m better at cooking than baking. I make a great curry. Although, as far as Indian sweetmeats are concerned, I make the best Chana Magaj. Got the recipe fr
Read more

On the Couch with Elvis Govender

Elvis Govender is a dedicated member of the local cricketing fraternity and has been involved in the game as an administrator, coach and player for more than 45-years. Govender is from a sporting family. He eats sleeps and breathes cricket. He devotes a large amount of his time towards nurturing talent from within Chatsworth as well as Kwa-Zulu Natal. Elvis Govender took some time off his busy schedule to chat to Tabloid Newspapers about his love, family and passion for the game. Tabloid Newspapers (TN): Tell us about your upbringing? Elvis Govender (EG): I was born in 1960 and come from a family which consists of four brothers and one sister. We previously lived in Bluff but were relocated to Chatsworth when I was one-year-old due to the Group Areas Act. I have lived in Chatsworth for 58-years. My father was a soccer player and my three brothers. I played both cricket and soccer. We played cricket competitively and at one stage my brothers Krish, Raymond and Stanley and
Read more